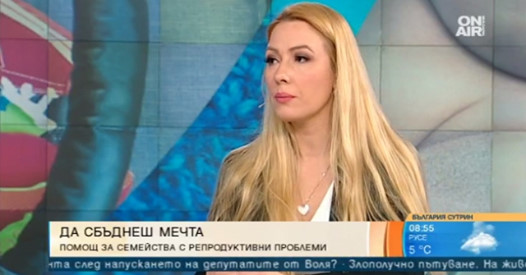 The actress donates two in vitro procedures to those who need one
almost 150,000 people in Bulgaria have a different reproductive problem that prevents them from feeling the joy of parenting. The data looks even more startling when we add a large percentage of aging populations and an impending demographic catastrophe.12

Actress Desislava Bakardjieva does not like this unpleasant picture. Early in March, she announced she would donate two in-vitro procedures. All people with reproductive problems can participate in the campaign by sending their letters by 21 April.

„The Bulgarian population is declining and the children go abroad, they do not want to continue their lives in our country.“ The younger generation is not aware of how a woman ends up having an in vitro procedure. In order to go to IVF before adoption many families have not done the relevant research, „said the actress in“ Bulgaria morning „.

One in vitro procedure with stimulation included and the second one is a donor egg procedure with 50 % off, said Desi Bakardjieva. According to her, there are still good people in our country who become donors.

She herself admitted that she had been provoked to go into this noble initiative from the fact that she recently performed a role as a woman with reproductive problems, and people close to her had gone through hell of being unable to become a parent. In addition, she said, extremely many people have told her that they are facing this problem.

„The common is the desire to have a child, a wonderful being to call you mom and dad, which provokes me, even more, to believe in miracles, science and faith must go hand in hand,“ the actress said.