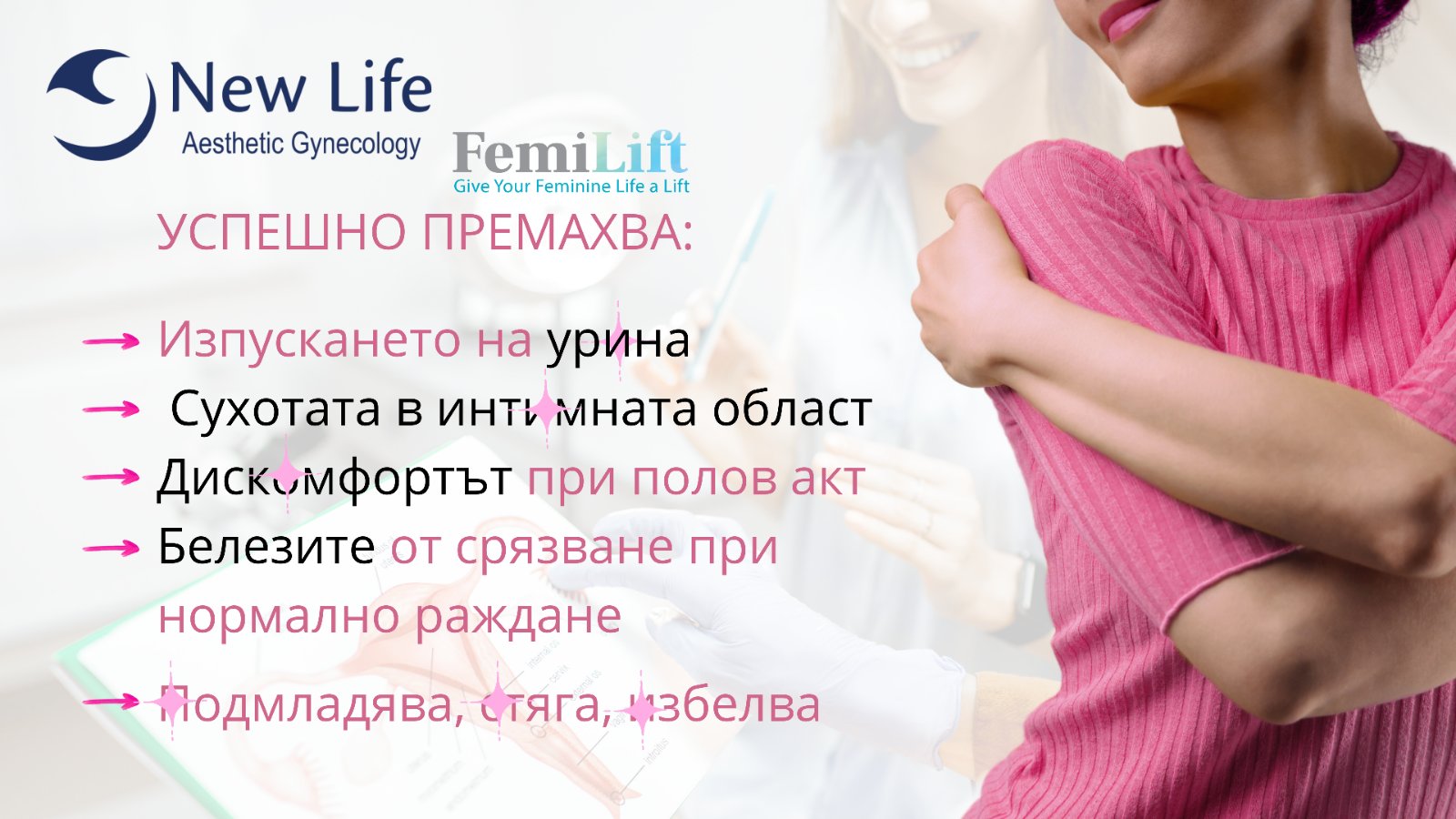 “New Life” Clinic launched a campaign with free examinations and consultations for the offered laser procedures, as a modern way of treatment of a number of gynecological problems.

The campaign will be held in August in the cities of Burgas and Plovdiv.

Examinations will be aimed at women with problems following a traumatic normal birth, stress incontinence (involuntary leakage of urine), atrophy or other related conditions in this area.

The clinic has two specialized laser devices of the highest class for performing non-invasive laser procedures – defined as a new era in the field of modern gynecology. Laser procedures replace many of the existing methods of treating a number of gynecological problems in a safe, painless and elegant way. This is a non-invasive (bloodless) procedure that does not damage the surface of the epidermis. The laser heats the tissues in the moisture area and thus stimulates the formation of new collagen. Instead of cutting out the excess tissue, as is the case with traditional surgery, the laser tightens it. The whole procedure lasts about 20 minutes. No preliminary preparation is necessary, there is no recovery period, there is no need to take medication.

The risk of complications or infections, which are possible during operative interventions, is eliminated. The effect is visible and tangible already after the first procedure, but for the best final result, it is recommended to perform three procedures at a certain time interval.

Each season has its own diseases. In winter it is the peak of respiratory diseases, while in summer the most common are gastrointestinal infections and insect bites. This year, due to the Covid-19 pandemic, we need to be even more careful about our health during our summer vacation.

They can be both viral and bacterial. They are most often associated with poor hygiene – improper storage or handling of food. Symptoms usually include nausea, vomiting, abdominal pain and diarrhea, and in children, fatigue and malaise.

Not every vacation needs to include such ailments, as their prevention is relatively easy. As with Covid-19, regular hand washing is extremely important. Since infection is mainly through food, choose very carefully where you eat. Nowadays, one can easily find reviews on the internet for almost any restaurant. In addition, dirty menus, toilets and tablecloths should be a “red flag” that hygiene in the kitchen is no different.

The most dangerous complication of these infections is dehydration associated with diarrhea and vomiting. Postpone your trips to the beach for 1-2 days, rest in a cool place and do not eat hard to digest, greasy food – if your condition worsens, it is best to visit the local medical center.

Wet swimsuits and synthetic fabrics are an excellent environment for the development of fungi and bacteria. Due to the nature of female anatomy, women significantly more susceptible to infections of the genitourinary system. Therefore, to save yourself  from cystitis, we advise you to always change your wet swimsuit after swimming, as well as to drink plenty of fluids – more frequent urination “washes away” the bacteria.

The cause of this ailment is blocked sweat glands. The accumulation of sweat under your skin causes a rash and small, itchy bump. When the bumps break open and release sweat, many people feel an unpleasant prickly sensation on their skin. Anything you can do to stop profuse sweating will help you avoid developing this condition.

Tips that dermatologists give their patients to prevent excessive sweating include:

Summer is the season of insects – mosquitoes, ticks, bees, flies, wasps and many more threaten to ruin our vacation or walk. Fortunately, in our country mosquitoes are not particularly dangerous, but their bites are unpleasant enough. It is assumed that light clothes, as well as the consumption of garlic could help repel them. Repellents remain the most reliable solution, and some of them also protect against ticks. If you are pregnant or breastfeeding, be sure to check if the product is right for you!

Do not try to remove a tick by rotating it or using home remedies but seek medical attention. Your doctor will best explain to you whether antibiotic prophylaxis is necessary and what symptoms to watch out for in the coming days.

Having your first child at 40 has become a more common occurrence. There are many reasons for a woman to postpone having a baby to a later stage: personal development, health problems, or simply not having met the right partner yet.

Giving birth later in life certainly has some advantages. Usually, women in their 40s already have a career, which means that they can afford to have a longer maternity leave. Older mothers are more patient and emotionally mature, which is a huge plus for raising a new family member.

Interestingly, women who give birth to their first child later often live longer and are less likely to develop cognitive impairment. Moreover, their children are more likely to attend elite schools and have a higher academic performance.

SOME ISSUES WITH A LATE PREGNANCY

Women are born with a fixed number of eggs in their ovaries, and the ovarian reserve decreases with age. In a normally ovulating woman, one or more of these eggs mature each month under the influence of FSH (follicle-stimulating hormone). Several hundred more begin to mature but become atretic and “die” every month. As the age progresses, the quality of the eggs decreases.

No matter how healthy a person lives, over the years chronic diseases begin to show their symptoms. Hypertension, diabetes, and autoimmune diseases become more common with age. On the one hand, your condition may worsen during pregnancy, and on the other hand, the pregnancy itself may become more complicated.

The risks of miscarriage and premature birth are higher in women over the age of 35. In addition, multiple pregnancies are more common in older women than in younger ones. This phenomenon is because the ovaries more often release more than one egg during ovulation.

IS IT DIFFICULT TO GET PREGNANT AT 40?

The success of modern medicine has made it possible for childbirth to be postponed until the couple is ready for it. Options for couples in need of assisted reproduction include in vitro fertilization, intrauterine insemination, donor eggs and others that you can take advantage of in New Life Clinic.

We must not forget that the chances of conceiving and carrying to term a successful pregnancy are highest until about 35 years of age. This, of course, does not mean that having a baby after 35 is impossible.

Often, fatigue and discomfort associated with pregnancy are more noticeable in women over 40. You are also more likely to develop gestational diabetes or preeclampsia.

Natural childbirth is possible, but there are often indications for a cesarean section.

Just because you’re 40, you don’t have to give up on your dream of having a baby. If you have been trying to conceive for at least 6 months and you are still unsuccessful, consult an assisted reproduction specialist.

Semen analysis is the first diagnostic test that is used to assess a man’s fertility.

WHAT PARAMETERS DOES A SEMEN ANALYSIS EVALUATE?

Total number of sperm in the ejaculate > 39 million

Immotile sperm up to 20%

The World Health Organization (WHO) reference values ​​and the Kruger criteriа for morphology are used to determine the examination’s conclusion.

You may come across one of these terms as the conclusion of your semen analysis:

Azoospermia – lack of sperm in the ejaculate

SHOULD I PREPARE FOR THE EXAMINATION?

Sexual abstinence is required within 2-5 days before the test. In addition, severe mental or physical stress as well as high temperatures (sauna, hot shower or bath) should be avoided. This ensures the maximum concentration of sperm and the results are the most objective.

New Life Specialized Medical Center for Gynecology has a Computer Assisted Sperm Analyzer (CASA). This is an automated system for sperm analysis, in which the concentration, motility and morphology of sperm is assessed by specialized software, unlike a regular semen analysis, in which these parameters are assessed by a biologist. The main advantage of semen analysis by CASA is that it eliminates the subjectivity associated with the human factor, which allows better standardization of the test.

The results are usually ready within 1 day. Abnormal results are not necessarily a diagnosis. Sometimes this is a temporary condition due to external factors. In these cases, a repeat semen analysis is performed after a certain period of time.